Skip to Content
Home / My open journal / Day 5: Money Mindset Workshop – Why not me?

I can’t have a lot of money because…

I feel the most resistance around money when I think about making a lot of money. I feel like it isn’t possible for me to make a million a year. Which is crazy because I know solo entrepreneurs who have businesses that make a million a year with their talents. I think that I’m not worthy in the way that those people are though, but who made them worthy?

I’m pretty sure they gave themselves permission to make crazy big money simply by doing it. If they would have waited around for someone else to give them permission to make a wildly successful business, there they’d still be waiting!

I feel the most resistance around money when I think about making ten grand a month because immediately something inside me kicks back with, “Oh, I’m never gonna. It’s not possible for me. They’re so much more talented/known/experienced than I am that I can never do what they do or have the kind of success they have”.

And I keep coming back to this thought that the global economy is about 86bn a year and I’m sitting here worrying about making sever figures a year? I’m pinching pennies, but what for? Me selling myself short isn’t helping. Yet I can’t shake this thought that I can’t make a million a year by being an illustrator and a writer. But why not?

I keep thinking that I’m not worth it and that I’ll eventually go have to find a job with my tail between my legs. Give up on my dream for good because I just wasn’t worth it. I just wasn’t good enough or talented enough. But is it about me being talented, or is it that just not enough people know about me?

Because I know that I do good work. I’m obsessed with getting it right, putting in all those little details that others so blithely ignore. My business is ultimately a way for me to correct the things in the world I feel frustrated with, make better products and designs than those that make me feel disappointed because they fall short of what they could have been, how much better they would be if someone would have just given it the time it really needed.

And so why not me? I mean, yes I started before I was ready – I took that advice even though I had no idea what I was doing or how I was gonna manage tomorrow. And I’ve been putting in the work every day, taking those little steps that will inevitably carry me closer to my dreams.

I mean I started a newsletter when I had no idea how to start one. I learned. I didn’t know what to write, but I wrote. I sent out emails to total strangers. And now, a year later, I dare say I’ve gotten much better at writing those emails and I’m sending them out every Friday, come hell or high water. I’ve also redone my lead magnet and rewritten my onboarding sequence and now, finally, the all feel like they align with me, my purpose and my work. So, I’ve made progress. As of yet, a lot of it is internal because mostly I’m seeing it.

But I keep getting new people signing up for my emails and I have to keep believing that they’ve found something of value in my work. That they’re here because they want to be and because I contribute something. So, why not me? Why hold myself back?

If you want to do the deep inner work too, increase your earning potential and break through your income plateau, sign up for The Money Mindset Workshop today.

It’s a 25-day program with real talk about money and daily exercises and journaling prompts that will help you completely transform how you think and feel about money.

This workshop is for you if you’re interested in doing the deep inner work that’s required for you to be able to fully step into your economic power and create a life for yourself that’s in alignment with your personal values.

It’s wonderful to have cats in the house again 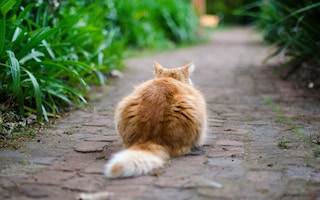 I cut my hair way too short today – but I don’t hate it!