Skip to Content
Home / This empath's journal / I cut my hair way too short today – but I don’t hate it!

I started cutting my hair at home when I was living in Pakistan. Every time I tried to go and get my hair cut there, and asked for layers, the person cutting my hair would declare that my nordic fair, fine hair was too thin for anything like that.

I’d had layers before, so it sounded odd. But when they insisted on cutting hair with tailor’s scissors, it makes more sense.

So, I started cutting it at home, in a shitty bathroom with a triangle mirror that was barely the size of my face.

And I’ve continued ever since with acceptable results. The few times I’ve gone to a hairdresser, they always end up doing things I don’t like or washing my hair with products that dry my hair and scalp out.

Plus it feels like a massive bother to make an appointment and take the time out of my day to go.

It’s just easier to do it at home. The only risk is, that sometimes it gets out of hand.

I wasn’t going to cut it this short, but I lost it. I cut it with scissors at first, carefully and thoughtfully. But after washing and drying, I saw myself in the mirror and realised it wasn’t enough.

The hospital was still visibly there, in my dry and split ends that looked like I’d rubbed a balloon on my hair to make it reach out in every direction.

Three years ago, two weeks before the due date, the baby in my belly turned upside down and didn’t have space to turn back. That started a long process of preparing for a breech birth.

They tried to turn her manually, the OBGYN’s hands trying to get a grip on the baby’s bum through my outstretched stomach. It wasn’t painful, the mass inside my stomach slipping out of her grip again and again, refusing to turn.

But it was uncomfortable and if I’d have to go back and do it again, I wouldn’t. My stomach muscles were still sore two weeks later when I went into labour and it made delivering a breech baby that much harder.

A natural start (my water broke in the shower after a day spent in period-like cramps and with a stiff back), an ambulance ride to the hospital laying on my side to prevent too much water coming out too fast, a night spent sleepless and crying – engulfed in nightmares due to the drugs I received – several careful doctor’s assessments and 28 hours of labour later, I ended up in a c-section because my daughter was coming out foot first.

Had she come out bum first, as a breech delivery should, it may have all been different. But a foot-first delivery just isn’t safe.

As it went, the heel popping out first and the baby then being pulled back in to be delivered through the hole in my stomach instead, I was in the highest risk group for post-natal infections. The foot created an opening for bacteria to travel from the vagina to the womb and about a week later I was back in hospital, with an incredibly painful uterine infection.

I was admitted for IV-antibiotics, because nothing else was going to work at that point anymore. I was also put on painkillers from the morphine family that didn’t suit me. They gave me hallucinations and every time I fell asleep I had nightmares, where I was trapped in small a room without doors and windows and surrounded by my worst fears and nightmares made corporeal.

I spent ten days in isolation in the hospital barely sleeping at all, in a hazy fog, mostly lying in a bed and sweating into plastic sheets. When I finally emerged back into the world of the living, I felt unrecognisable. Not only had I lost over 10 kg in the day after delivery leaving me feeling like a stretched out sack of skin, my hair looked like I’d been washing it with sand.

During the three years since, I’ve watched my daughter grow up and learn new skills as she figures out how to manoeuvre in the world, and I’ve been working to get the effects of that hospital stay out of my hair.

Finally, I feel like I’m close. I’ve watched as the line showing the difference between hospital hair and new hair has slowly moved down the side of my head. Now, it’s sitting by my ear and when I was cutting it, something snapped. I grabbed the comb and my husband’s beard trimmer and started shaving down the tips with fervour.

I wanted to get rid of it. I wanted those memories done with. The sadness and sickness that’s been lingering in my hair and in my heart for the last three years removed. Nature disposes of the old in order to make space for new growth. I wanted the same.

So, now I have hair that makes me look ten years older than I am and like I’ve had 10 more children rather than just the one. Pregnancy never was my thing, I didn’t glow or have luscious locks or wake up every morning to birds singing on my window ledge and woodland creatures coming to see me bake.

I swelled, sweated, slept, cursed, catastrophised and waddled through my pregnancy, especially the last three months. When it was over, I vowed never to do it again.

Freeing myself from more of that dried out, broken and twisted forest, hanging down on my shoulders was a good decision because now there’s space to grow something new. 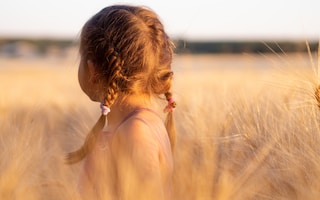 Day 19: Money Mindset Workshop – It was stressful from the beginning

Why have an online public journal?