I look at the photographs and try to remember how old I was when they were taken. I have short brown hair, and I’m skinny.

That makes it 9th grade, and I’m fourteen or fifteen.

In 9th grade, people complimented me on how skinny I was and how amazing it was that I wasn’t fat anymore.

It was beside the point that I had lost all the weight because I had not adequately eaten for an entire year.

It was irrelevant that, when I should have been eating proper meals, I was sustaining my starving body with water.

I obsessed over not being fat anymore.

Being fat was why I had been bullied in school, why I had been singled out as a loser and the difference between “loser” and “popular” had only become starker moving from primary school to junior high.

In this new dynamic, I became determined not to be an outsider any longer.

When I’m looking into the camera, I’m smiling as if the photographer captured a moment between us.

Usually, with my head tilted to the side, as if acquiescing to having my photo taken on the photographer’s gentle insistence.

Sometimes, I’m outright laughing like I heard a good joke.

The photographer has caught me at a moment of reflection or intently listening to someone off-camera.

In one photograph I’m pensively leaning over my desk, staring into the sunset, seemingly oblivious that my picture is being taken.

This, of course, is all a lie.

The photographer of every single picture is me.

In an age before selfies, I was staging photographs to make it look like I wasn’t alone.

Trying to convince myself that I was less lonely than I felt.

I’ve always been awkward in a crowd, a trait that was amplified by starting 1st grade.

My preferred quiet life, with my close-knit group of three friends, shattered in the assembly line environment at school.

Being the first kid whose parents divorced only gave me more of the kind of attention I abhorred.

My best friend turned on me when she found someone new, someone shinier, and the bullying that followed was humiliating and heartbreaking.

I often wanted to sink into the ground and disappear.

I ended up in the equivalent of the sad divorcee’s club.

We banded together out of fear and were stronger as a pack, but never really friends. The only thing we had in common was that we were hurt and alone.

It was easier to tolerate our loneliness together.

As my dislike for the world around me grew, so did my fleshy armour.

I started putting on the pounds in 3rd grade.

As the daughter of a single mom working three jobs, I ended up eating a lot of take-out. It was fast, it was warm, and it did the job. Waiting for her to come home, I watched TV shows with families and pretended to be one of them.

As my ship started listing on the ocean of life, I began losing control.

Things on deck started sliding and falling off the sides. I helplessly watched them drift away. The more I lost control over my life, the more power I began to exert over my food.

At first, it meant eating things that felt safe. I insisted on having the exact same dinner every night for years.

People still make friendly jokes about it — what to them seemed like a curious oddity felt like drowning to me. The more chaotic I felt the tighter my grip on food became.

In the end, I was essentially living on sugar.

Those familiar, simple foods that made me feel almost happy while I ate them.

Eventually, I started noticing the pity in people’s eyes. So young and so fat, how sad.

I withdrew into myself, having friends be damned.

That was how I thought you fixed problems.

After five years of solitary confinement, something snapped.

I got fed up with my exile that never truly solved anything. This wasn’t going to be me anymore.

If it hadn’t been for my hungry stomach making too much noise in class, I wouldn’t have eaten anything.

I found that drinking water quieted a rumbling stomach and I carried a water bottle as if my life depended on it.

I didn’t think I had anorexia: I was taking control of my life. Sick people didn’t take action.

I was just finally whipping my lazy ass into shape.

But it didn’t cure the loneliness.

So, instead of waiting for my mom to come home in front of the TV, I started creating a fictional past for myself.

I thought that one day I’d look at the photos and believe that I was in good company, that I’ll forget it was all a lie and be happy that I wasn’t alone.

Those photographs still seem hollow to me.

The loneliness I was trying to erase I see lurking in the negative space around me.

But my discomfort was the price of admission to a meaningful life; the photographs I take now tell a different story.

As we go about our day, I’ll stop and take a picture if she’s doing something I want to remember or if the light is lovely.

Her photographs now outnumber mine, and my heart overflows because I know she never has to stare down an empty lens.

How to approach the rage cleaning woman (and survive!)

If you were a girl in Pakistan, your life would be unrecognisable 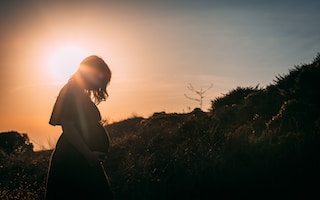